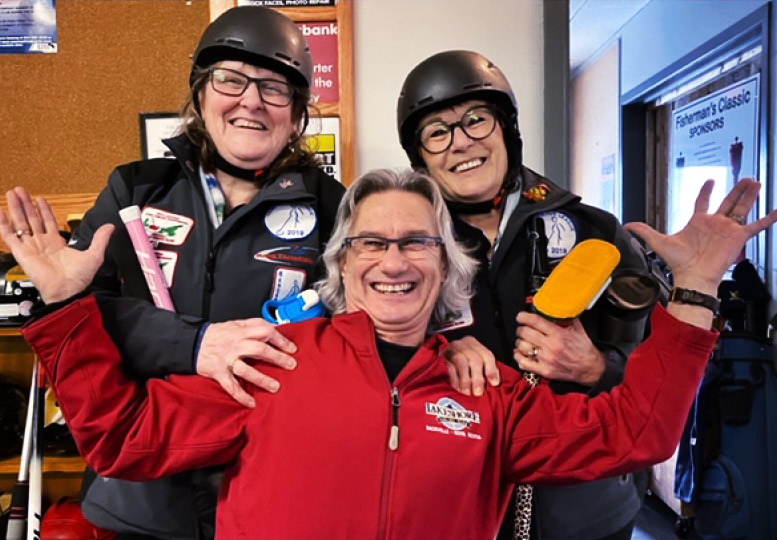 To promote and develop stick curling within Nova Scotia.

To maintain a close association with the Nova Scotia Curling Association (NSCA).

To represent Nova Scotia’s interest on the Canadian Stick Curling Association’s (CSCA) Board of Directors.

The NSSCA values include a commitment to

We will represent the interests of all Nova Scotia stick curlers and strive to expand our membership to include non-traditional groups. We will strive for gender and geographical representation on the Board to allow for balanced and informed discussion of issues. We will create, and maintain, a non-discriminatory environment where input from all members is encouraged and individuals are treated with respect and dignity at all times.

The NSSCA Board represents the membership, will conduct themselves in a transparent manner and will be accountable to those members. NSSCA is a non-profit organization and there will be full financial disclosure of its activities. The Board will strive to effectively communicate its plans, and the results to date accomplishing those plans, to the membership on an on-going basis. 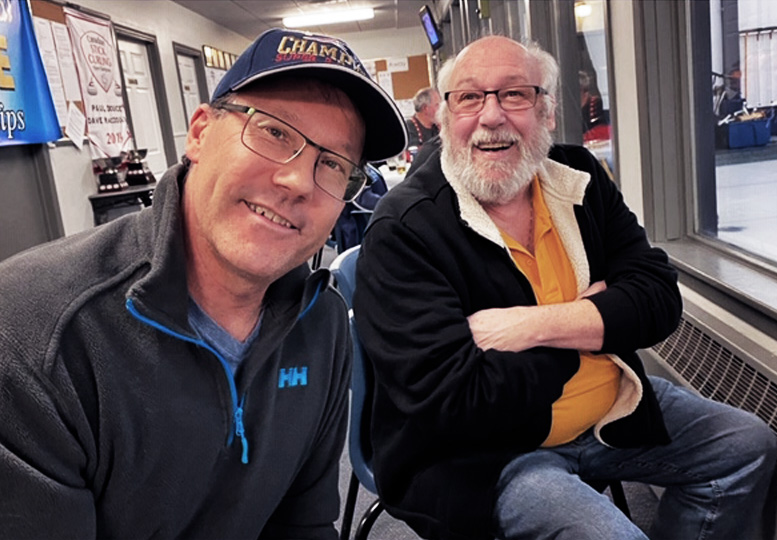 The NSSCA will hold itself to the highest ethical standards in all of its dealings and in its interactions with members.

The NSSCA will always act in the best interest of the membership. 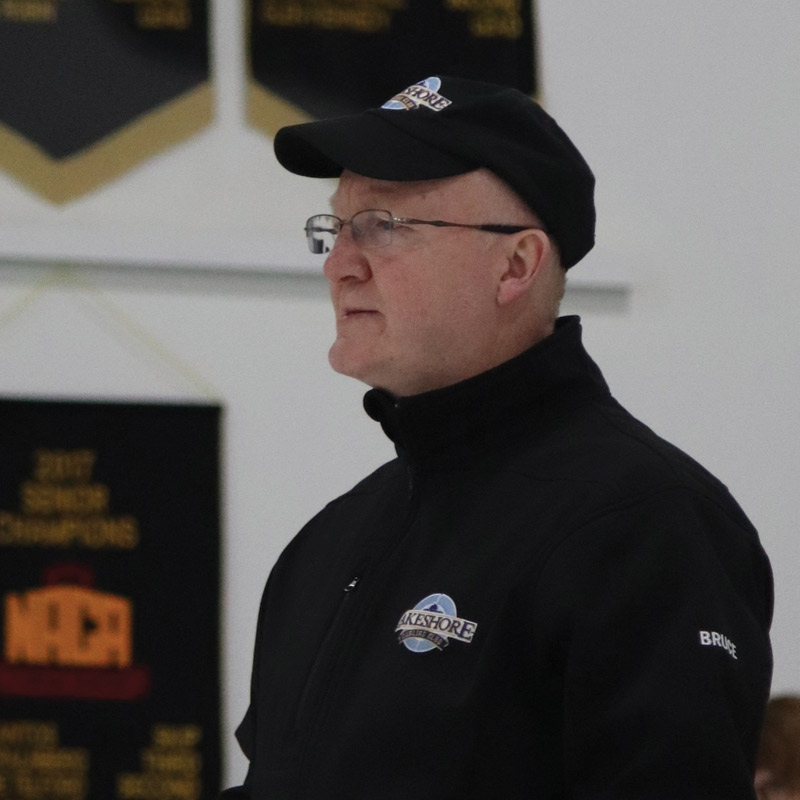 I am a retired CPA, CA. Spent most of my career as an assistant professor at Mount Saint Vincent University (17 years) and as president of an educational consulting company (15 years).

I am a hockey guy who found his way to stick curling after back injuries prevented participating in other sports. Immediately fell in love with stick curling and truly relish the ability to actively compete again.

Formed a competitive stick curling league in Nova Scotia after a trip to the 2018 national championships in Alberta.

Look forward to being the Chair of the Nova Scotia Stick Curling Association (NSSCA) and working with our very talented Board of Directors to move stick curling forward in Nova Scotia. 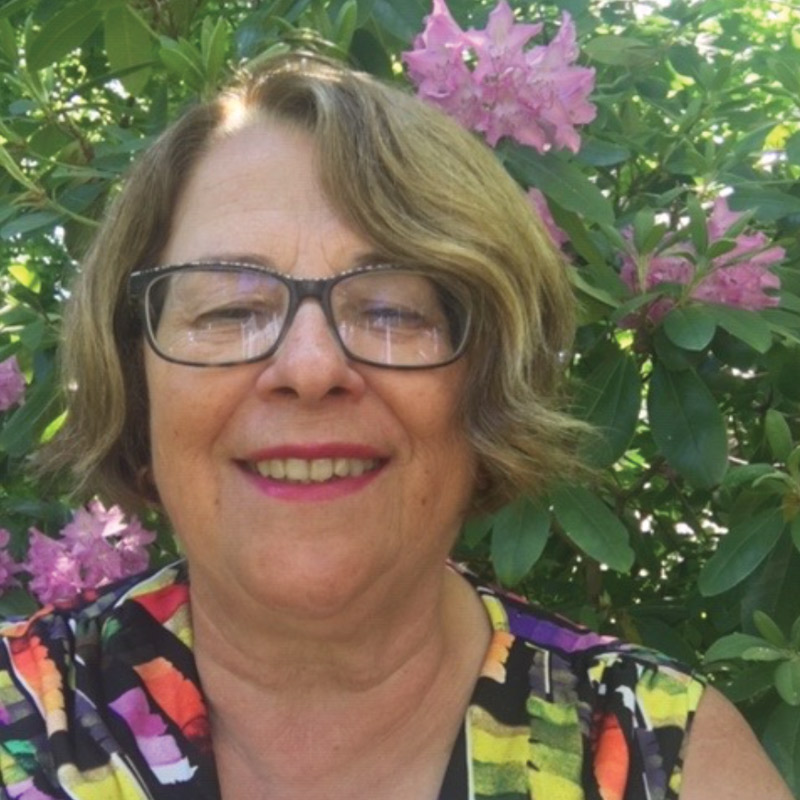 Betty Mattson is a member of the Wolfville Curling Club and is the Vice president of the Nova scotia Stick Curling Association. She has been interested in Stick Curling since her retirement from the Health care field. She has worked on numerous committees in Healthcare and is now spending time on the Provincial and National Stick Curling Association. Stick curling is a growing sport within Nova Scotia and Canada. It allows Seniors to remain active in the winter sport while enjoying the camaraderie of others. I look forward to enhancing the growth of this sport in my role as Vice President. 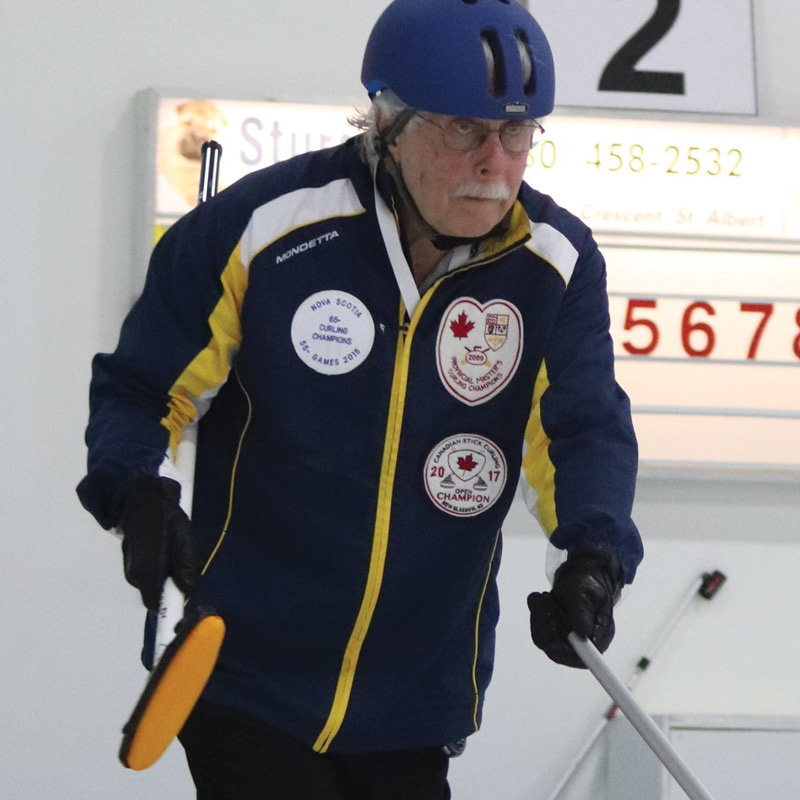 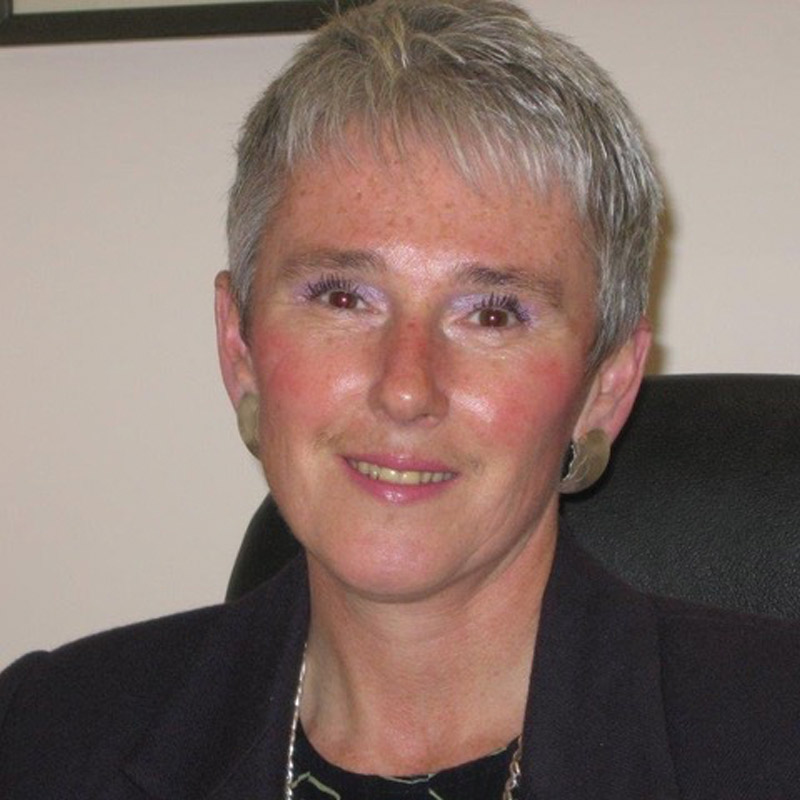 Patti looks forward to working with other Board members in providing leadership to promote and develop excellence in Stick Curling. 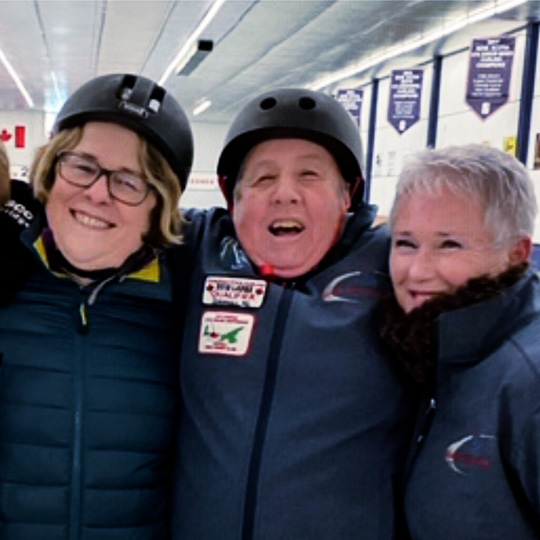 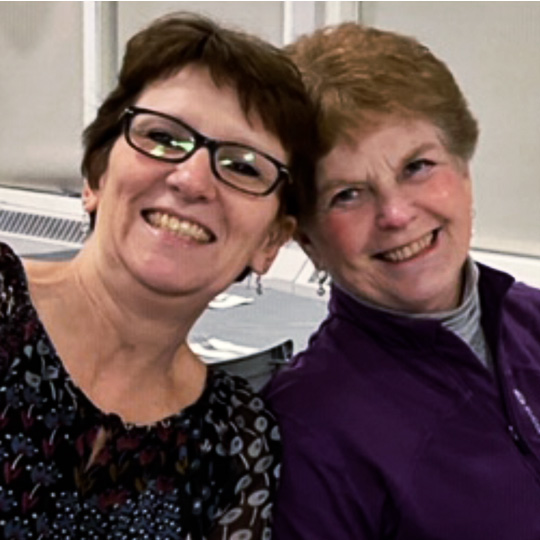 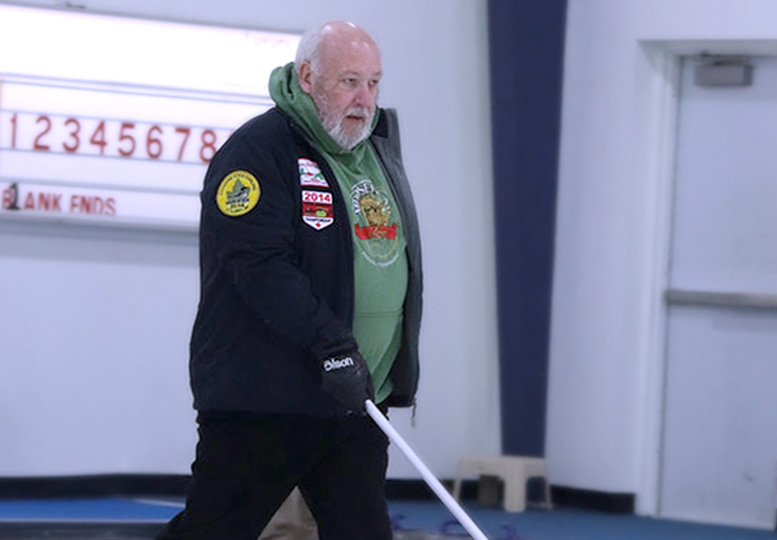 We would like to offer stick curling clinics at your club using our experienced instructor group.

Please use the contact form below to arrange for a stick curling clinic at your club.

TO ARRANGE A STICK CURLING CLINIC

To send an e-mail to the clinic committee chair please use the contact form below:

Below are the stick curling rules revised and combined as of August 2020. 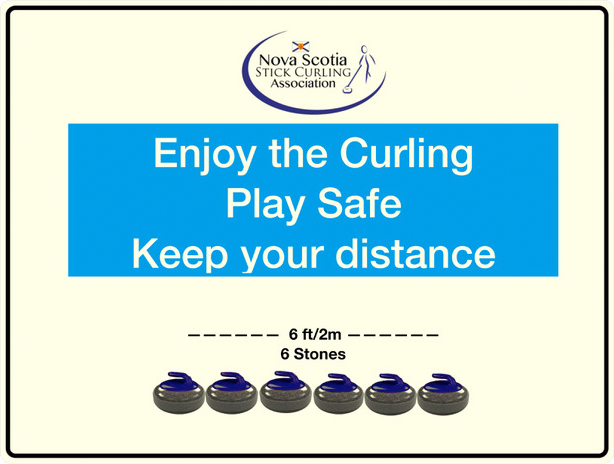 Stick Championship
I – GENERAL
The Stick Championship is open to any curler in NS who meets the eligibility criteria for the Provincial Championship and the Residency Directive.
While a single winner will be declared, the top four (4) Open and top four (4) Women’s finishing teams earn the right to represent Nova Scotia at the Maritime Stick Curling Championship.
If a team qualifying for the Maritime Stick Curling Championship cannot fulfill that obligation, then the next highest finishing team will be offered that opportunity. Provincial championship standings and tie breaker rules will form the basis upon which alternate teams are offered an opportunity to represent Nova Scotia.
The Local Rules of Play governing this Championship can be found in Section 6.

II – ELIGIBILITY
Teams may be composed of players from any NSCA Member Club
Players must be nineteen (19) years of age, or older, as of December 31 of the year prior to the Championship
Teams may consist of a maximum of two (2) players plus one (1) coach.

III – COACHES
Each team may be accompanied by a coach in accordance with the Coach Eligibility Chart
The minimum standard for this event is shown in Table Z (Section 5).
A coach may not join the team on the ice surface during a time out.

IV – FORMAT OF PLAY
The format of play for the Provincial shall be determined by the NSCA Competitions Committee in collaboration with the NS Stick Committee. The format shall guarantee a minimum of three (3) games for each team.
All games in the Championship shall be:
Six (6) ends duration. If a game is tied after the allotted six (6) ends, the teams shall play extra ends until a winner is declared.
Officiated – Last stone draw to the button (LSDB), time outs, pace of play and rules violations shall be monitored by an NSCA official. The host club organizer will assign volunteers to assist the NSCA official.
Untimed but at the discretion of the NSCA official, slow players may be put on a “shot clock.”

V – PRE-GAME BRIEFING
A pre-game briefing and coin toss will be held by the NSCA official approximately fifteen (15) minutes before each draw.
At all stages of this championship a “coin toss” will be used to determine:
Stone handle colour: The team choosing the dark coloured handle (blue/red) will throw a clockwise draw for their last stone draw. The team throwing yellow handle will throw the draw counter-clockwise.
Pre-game practice order.
A draw to the button competition will be used to determine last stone advantage in the first end.

VI – DRAW TO THE BUTTON
Following the completion of the Pre-game Practice, the Last Stone Draw Button (LSDB) will take place.
Team members will alternate taking the LSDB.
All LSDB shots will be thrown towards the home end unless decided otherwise by the championship organizing committee.
The Coin-toss winner delivers their LSDB first. If the two stones are tied in distance, or if neither team finds the House, then Hammer goes to the coin-toss winner.
A team cannot sweep the opposing team’s rock on a LSDB to determine hammer.
Both stones will be measured and used for tie breakers.

If neither team scores in an end (Blank End), the team that delivered the last stone in that end shall have Hammer in the next end.

VIII – TIE BREAKERS
Teams tied for a Playoff position cannot be excluded from the playoffs without having played a tie-breaker game(s).
The tie-breaking process shall consist of (in order):
Most wins.
Results of head-to-head play.
Draw to the button (LSDB) accumulated distances.
Closest draw to the button.

IX – TEAM RANKING / SEEDING
The following seeding system has been adopted for seeding teams at the NSSCA Provincial Championship.
Points will be awarded for each person on the team.
Points are based on the prior season’s NSSCA Championship results.
If only one person from a team returns the next year they will carry only their own points forward to the new team. Team points will consist of first team member’s points plus the points associated with their new partner.
Winner ​​​​65
Finalist ​​​​50
Semi Finalist ​​​40
Quarter Finalist ​​​30
Non-Playoff teams per win​  ​07
Teams with no wins​​ ​05
New Entries this year​  ​00

X– TEAM DRAW ASSIGNMENTS
The championship format will be determined by the NSSCA in consultation with the host club organizing committee
Teams will be seeded based on total team points determined using section IX above.
If there is a pool play format, then teams will be placed in pools in a manner that ensures the best possible balance between pools.
The championship format and related seedings must be approved by NSCA

The NSCA reserves the right to hold an Open, Women’s and Mixed Division championship if the number of teams allows.
Stick

Rules of Play
The NSSCA applies the Rules of Curling for General Play, as approved by Curling Canada, expect where modified by Canadian Stick Curling Association Rules, or as modified below.

Teams
(1) Each team is comprised of two curlers.
(2) One member of each team stays at each end of the rink and must not cross center ice (except as provided for in Rule 6.2 related to timeouts).

Delivery
The two delivering curlers alternately deliver six stones each per end, while their teammates skip that end. The next end roles are reversed.
All games are scheduled for six ends.
Each stone must be delivered with a curling or delivery stick, from a standing or, in the case of a wheelchair, sitting position.
Some part of the stone must touch the center line at the start of delivery. Delivery progress must be forward towards the broom being held at the other end of the rink. Initial delivery progress cannot be a lateral motion.
All stones must be released before reaching the near hog line.
A stone is in play when it reaches the hog line at the delivering end. A stone that has not reached the hog line at the delivering end may be returned to the player and be redelivered. The player can only attempt the previously called shot using the previously called ice.

If there is a violation, the delivered stone shall be removed from play, and any displaced stone(s) shall be replaced, as close as possible, to their original position by the non-offending team.

Extra-Ends
All games are six ends.
In case of a tie after six (6) ends, an extra end is played, with each player delivering 3 stones. Curlers exchange roles at the midpoint of an extra end to complete the end.
An extra end shall be played from far end (skip end) to the near end (closest to the glass)
In the event that the extra end is a blank, another end is played using the extra end format. Each player will deliver their stones from the end of the rink where they finished the previous extra end.

To be kept up to date on stick curling developments, and receive our newsletter, please join the mailing list.

To send an email to the current NSSCA chair, please use the form below.